I’m definitely one of those people who have too many hobbies. I’m pretty keen on gardening/playing in the dirt, I’ve got a fair size stack of books on my bedside table awaiting my attention, I love breaking out a board game (think Settler’s of Catan, not Monopoly), I still get into video games…OK mostly Minecraft, love some tent camping and hiking, and when we were living in Michigan we were apiarists as well (hope to get back into that once we’ve settle somewhere a bit more permanent). One might think that’s quite enough for one person but not me. I’ve been caught up with another diversion…cosplay. It appeals to the way I think, I’ve always been a bit of an inventor (I remember diligently running string across the curtain tops of the bedroom I shared with my sister growing up to create a pulley system to open and close the curtains much to her dismay). It also works well for me because I get bored fairly easily so long term projects are not for me, with cosplay each project is different so it easily keeps my interest.

It started off as some casual costume creation for Halloween parties, the usual kind of stuff…Poison Ivy, a Fembot, Medusa…and as soon as one was complete and had been worn I was immediately planning the next. Then it escalated a bit to more complex costumes like Midna from Zelda Twilight Princess, a nurse from Silent Hill. More recently I’ve stepped up to two costumes a year, one for Halloween and the other for whatever convention we’ve attended. My convention costumes have included Lucca from Chrono Trigger, Black Canary and a homegrown steampunk conglomeration.

Now here we are and I need to find a space in this new house that I can abuse a little bit while my imagination runs away with me. I am going to try a document some of my processes here because I’ve found one of the best inspirations that gets my arse off the couch is sharing the experience with others.

First up is a project I started work on in America and intend to finish up now. It’s Alice from the pc game Alice: Madness Returns and is my most ambitious costume yet. I’ve chosen to combine two pieces that I love the visual of, the Royal Suit and the hobby horse: 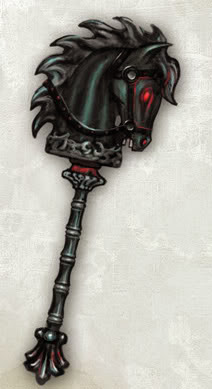 I’ve made some serious progress on the hobby horse but still have a lot to do. In some of my upcoming posts I’ll cover how I did what I’ve already done, including fun with expanding foam and the magic of Worbla 😉